By Marilyn Bailey | Special to DFW.com

The intersection of Magnolia and Sixth avenues is Fort Worth’s vegetarian crossroads.

The vegan powerhouse Spiral Diner, of course, has held down the northeast corner since 2004. Across Sixth is the city’s best pasta restaurant, Nonna Tata, where Lacto-ovo vegetarians can choose from several classics, including seasonal filled-pasta specials like tortellini with pumpkin.

And on the other side of Spiral Diner is Lili’s Bistro, which boasts six vegetarian entrees on its dinner menu — including a grilled portobello atop rosemary polenta ($13), a tomato tart Provencal ($18) and a quinoa-stuffed poblano ($18) — and is poised to add two or three more. If this stretch of Magnolia is kind of a Justice League of vegetarian comfort food, it sometimes seems that Lili’s Bistro gets less recognition for its heroic efforts.

Lili’s is certainly not underappreciated by its regulars, as the evolution of its veggie menu shows.

“When we opened eight years ago, we didn’t have much of a vegetarian selection — it was pretty much the obligatory pasta and grilled vegetables,” owner Vance Martin says. “We started getting a demand for [vegetarian dishes] really early on, and I was resistant because we were right next to Spiral Diner. I figured that was their game, and I didn’t really want to play in their arena.”

But he created a vegetarian section on the menu, initially with about four items. “No matter how many items we had, demand would grow,” Martin says. “I had zero interest in it, and now it’s one of my main focuses.”

Three years ago, he hired Pat Boyd, the night general manager and the brains behind today’s vegetarian menu. Boyd, a Dallas native, became a vegetarian at age 19 and worked with Martin at Fort Worth restaurants as far back as the 1980s. But he left the area to spend a few years in the Pacific Northwest, including eight years as food and beverage director at the Mayflower Park Hotel in downtown Seattle.

“I learned about food in Seattle and Portland, working with numerous James Beard Award winners,” he says, discussing the region’s amazing produce. There, things like farro and other ancient grains, which we’re just now seeing on menus in Texas, were familiar ingredients.

Martin credits Boyd’s experience for the success of today’s veggie menu at Lili’s. “The real key is the fact that Pat is a vegetarian and is far more savvy in this arena than I am.”

Now Lili’s is kicking up its meatless offerings even more. This month, it will launch an expanded dinner menu with eight or nine vegetarian entrees instead of the current six. My favorite, that roasted poblano stuffed with quinoa and veggies and topped with tomatillo sauce, is staying, but about half of the other items will rotate off.

The new dishes were still being worked on last week, but Lili’s auditioned a few at its first-ever vegetarian wine dinner in January, and invited diners to give feedback. (This was the fourth special vegetarian event I’ve attended at a Fort Worth restaurant in the past eight months; I’d never heard of one in my previous 15 years here. And as usual, most of the attendees were not vegetarians, just bi-curious diners.)

One obvious hit was Baja tacos featuring grilled tempeh — a soy product — marinated in No Label Brewing Co.’s 1st Street Ale, a smoky slaw, shaved radish, and queso fresco. These will be part of the new vegetarian dinner menu.

Another winner was farro risotto, with the grain-of-the-moment spiked with roasted butternut squash, kale, toasted hazelnuts, smoked Gruyere, currants and truffled pistachios. Boyd’s latest variation on this, topped with an Alfredo sauce, is also being considered for the new menu and had a tryout as a special at the restaurant last weekend.

I’m not usually eager to order things like tempeh, which even Boyd acknowledges don’t have much natural flavor, but the tacos were excellent. He’s thought a lot about how to infuse even such old-school meat substitutes with real flavor, visual pizazz and appealing texture.

Hearty portions, big flavors and a lack of fussiness (the restaurant’s tagline is “unpretentious global cuisine”) have made Lili’s a good fit in Fort Worth — the place is busy night and day. And it’s one of the best spots in town for everyone, even carnivores, to explore meatless dining. 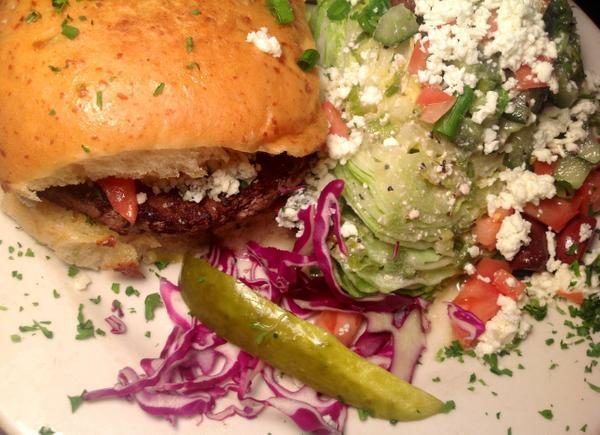